Clinic with a friend

Ella went to clinic on Wednesday, but this time it was not for her counts, but she went to support her friend Kennedy!  I love this shot of the two of them.  Thanks to cancer, they both have the same haircut, and they look like twins with their short curly hair. They had a fun morning together playing on Kennedy's tablet and when we were done at clinic Kennedy picked PF Changs for lunch.

It was interesting being at clinic and looking at things from a different prospective.  I've been there a hundred times, but it was always my child having a procedure or blood draw.  This time I had more of an opportunity to look around and listen.

About three months ago Ella and I met a little girl in clinic.  Lets call her "Sophie".  She was about three years old and the most inquisitive child. She walked right into our room and started watching everything that Ella was doing.  This is very unusual behavior in clinic.  Most people stay in their little clinic room out of fear of spreading germs to another child, but this little one opened our door and walked right in with a big smile.  Her mom spoke to her in a different language, but you could tell Sophie had no intention of leaving her new friends room.  I assumed this little girl was a sibling of a child in treatment. She playfully peaked in and out of our room full of smiles and giggles until it was Ella's turn to be seen by the doctor. Then she went off to find another room to peek into.  I had not given a second thought to this playful child until I saw her at clinic on Wednesday.  I took me all day to recognize who she was.  It woke me up last night in tears.  Same smile, same height, but 3/4th of her hair was missing.  It was not a sibling in treatment, it was Sophie.  It had never even crossed my mind that she was the child with cancer because she was so happy.  Giggling in our room, watching Ella and just smiling.  How could I not have seen that she was in treatment? I truly believe it was her innocence and joy that kept me from seeing it.  Children has this incredibly envious ability to live in the moment.  As adults we spend so much time stressing out about our futures and our families future.  When I met her, she wasn't a cancer child, she was just a happy child, living in the moment, looking for a new friend. I have to say I envy her. Even in clinic this week, she was smiling and standing at the Art Cart and trying to find a game or craft that would pass the time.  I didn't see cancer in her face.  If her hair had not been missing- I would not have known at all.  I wish I had that ability. I have to work on that.

If you enjoy keeping up with us, would you please take a moment and sign up to follow our blog!  We would really appreciate it! 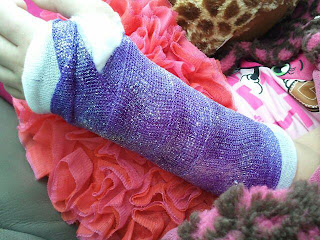 Well, I wanted "normal" for Ella, and we got it.  Ella broke her wrist this week at Tumbling class.  She didn't even make it into class, she fell on the bleachers while waiting for class to begin.
She is pretty mad that she has to have a cast, so to try to make it better, we sprinkled glitter on it as it was drying to "Bling" it up a bit for her.  Plus she got to pick her favorite color- Purple.
5 weeks in the cast and she will be good as new!

Blessings~Katie
Posted by Unknown at 1:16 PM No comments:

Ella got to do a normal girl thing Saturday- she got her ears pierced!  She had it on her"list of things I want to do when I'm done with cancer", so she finally got the okay this past Tuesday at clinic from Dr.S to get it done.  Her counts were good and her liver function is almost normal again! Praise God for that.  She was so excited.  She did not even flinch when the Dr. pierced her ears, and she did them one at a time.  She picked purple earrings, of course, and she is so very happy.

It is so great to be able to let Ella do something like get her ears pierced.  I still have a little worry bug in the back of my head wondering if it is really okay, will they get infected, what if her counts drop, but this is all stuff that can happen with ANY child.  Da Da freaked out a little bit because he wasn't ready for her to grow up any more, which I can totally understand, but she was definitely ready for this step. She is so happy about having pierced ears.

I'm going to brag about her a little now- so beware.  One of the side effects of chemo is educational drawbacks.  I have always been concerned that she would start to slow down with her learning and she would be behind.  Well, she isn't.  Her school takes a MAP test 3 times a year to see how the kids are advancing in Math, Science and Language Arts.  Ella scored so well on the Language Arts portion that they sent her to the 2nd grade class to take it at their level, and she blew that one away too! So all I could think was- TAKE THAT  AND STICK IT IN YOUR PIPE CANCER!  My girl is smart and you can't have any of her brain cells (insert my tongue sticking out at cancer here). I also talked to her teacher about her social behavior in class and she said she is very social (unlike when she is with me). I was so glad to hear this, just makes my little heart happy!

Ever have one of those dreams that seems so real that you wake up and for the first few seconds you have to shake you head and think "Did that really happen"?  I had one of those last night.  Although I think this qualifies as more of a nightmare than a dream.

I know where it came from.  I think I saw the same commercial yesterday at least 5 times that asked the question "What would you do if you were told your child had cancer?".  I love that they are trying to make people aware that these little warriors suffer too, but I hate being reminded over and over that I have been that parent and I have heard those words, but, I digress.  Also one of my friends noticed how thin Ella is now.  She is completely off steroids so she had totally lost her protruding belly and also she grows 1/4-1/2" each month it seems.  She now wears the same size pants her 9 year old brother does.  When she made the comment, I told her how much it worries me that she is so thin.  When Ella was 1st diagnosed she had gotten really thin.  Her head looked too big for her body.  These two things followed by a commercial for a horror movie that is about to be released made my nightmare seem so real.

Steve and I were in our home, but it wasn't the home we live in now, it was different.  Ella was at a friends house spending the night.  We got a call from the girl's mom that Ella died in the middle of the night.  The mom was apologizing over and over, but no tears.  No one was crying. I didn't get to see her.  She went right to the hospital.  Ella's oncologist came to our house and told us "This just happens sometimes." For some reason, in this dream her oncologist came to the house with her daughter.  Steve started offering her Ella's Build A Bears saying that we needed to get her room cleared out anyway.  I remember feeling really bewildered.  Like I just could not understand why this had happened.  It felt sudden and out of the blue. I was crying and asking why, but no one would answer me.  They just kept saying "I don't know, it just happens.".  I felt like I was standing still, but everyone else was moving in a circular pattern around me- like they were going on with their lives and my feet were stuck in one place and all I could get out of my mouth was the word "Why?".  Then I saw Ella lying in the fetal position on a bed.  Her hair was longer than it is now- more like it was when she was first diagnosed with ALL. She wasn't moving, just lying there.  Then I woke up.

Fear sucks. You can push it away during the day, but it will find you at night. You can tell yourself it is okay.  Everyone asks "Aren't you glad it's over"? You can smile and say yes, because it is easier than explaining that it's not really ever "over". As soon as I woke up, I went into Ella's room, felt her head and climbed into bed with her.  Why did I feel her head? Because it is my natural reaction to make sure she is doing well. Always checking for a fever. It's was my only indication that anything was ever wrong.

“No one ever told me that grief felt so like fear.” ― C.S. Lewis, A Grief Observed

I think I am still grieving the loss of Ella's innocence.  I get lulled into a false sense of "she won't remember this", and then she will say something about needles, or hair loss and I think- will she ever forget?  Maybe my grieving and fear are merged into one and I fear this will happen again, or that she won't be able to have children, or that she will have development delays. Maybe this is why they feel like the same thing.  And it is not just Ella I fear for.  My dad who had stage 4 skin cancer had refused to go in for his final scans, until I called him to let him know that Ella's came back as cancer free. He called me and told me SHE inspired HIM to go get checked.  He has beaten the odds.  They told him he wouldn't make it past two years, and he has.  I also fear for my friend who was told she has an 85% chance of getting a few different types of cancer within 5 years of finishing her treatment.  She is almost at 3 years.  Deuteronomy 31:6 states: Be strong and courageous. Do not be afraid or terrified because of them, for the LORD your GOD goes with you; he will never leave you or forsake you."  Why is it so hard to turn our fear over to God and let him handle it? Oh how I wish I had the strength to do this during the day, and at night.  I will leave you with this song from Sara McLachlan- Fear.